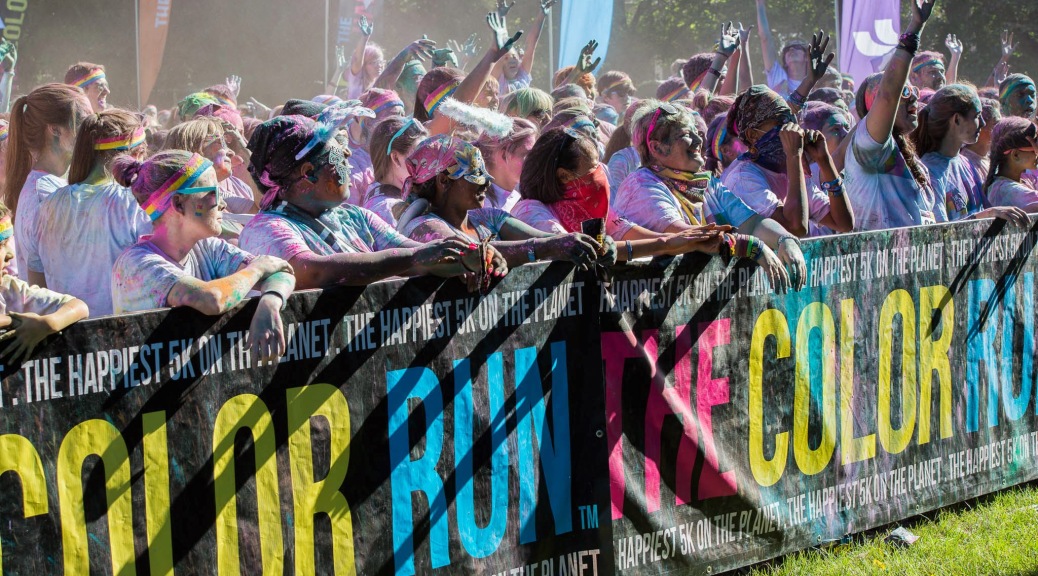 So!… Recently I just volunteered at my first color run…. All I can say is WOW! I don’t see how they do it… Today I witnessed hundreds of people pay money to yell and run miles down the street to have people squirt “tye-dye” color at them.

h, it was a fluid event and I understand and see how they have so many events around the world. All of the volunteers were assigned to either 1 of the 4 color zones, water detail, or the store. Each of the Color zones had station supplies organized in a packing crate and the volunteers help set up. Basically a few tarps for the color, mustard bottles, about 10 of the 10 ft. promotional flags, archway and a sounds system for music.  Once the last person left the starting line, it was taken down and each zone was disassembled after the last group went through it. When I left my zone and walked to the finished the entire starting area was pretty much non-existent. They definitely have it to a science.

I was blown away at how cheerful and motivated the people were running into the color zones getting color put all over them. I was blown away at some of the costumes and outfits that people enjoyed getting color all over. There was a smile and joy on almost every person. The goal of the run was nothing at all about the run, but getting color squirted at you. I recall in my zone particularly a point to where we were backed up and instead of running right through to finish the race, they basically lined up to make sure they got color on them. Organized chaos were the words that came to mind at that particular moment.

Upon finishing the race there were about 4-5 arches with confetti and cheers that accompanied you when you entered it. I am sure that was a moment that you felt accomplished and to top it off, right by the finish line was a stage and open field that turned into a Color Throw Concert. Hundred of people jumping up and down to music with a entertainer counting down and when he gets down to “1”…

Well you know from there…

At the beginning of this year I had the opportunity to learn and take photos of something that I was completely clueless about at the time, but now very impressed by, Free-Running. Free-Running is more formally known as Parkour. The group that I shot calls themselves Team Apocalyptic.

Team Apocalyptic is a part of Hayden’s Freerunning Academy, which is a program taught out of Hayden’s International Gymnastics Academy. These are really some talented individuals. They spent a few hours running in the park… I had a blast. rained a bit and then the sun came out and left again into the sunset while they continued to run free…

I took most of these shots with two lenses: a 35mm f/1.8 and a 55-200mm variable apertured lense. Most of the photos were shot between 1/400th of a second and 1/800th of a second. The reason I shot them at that speed was because I didn’t want any blur or camera shake in the photo. I rarely like motion blur in my photos. I shot most of the pictures at f/4 because I wanted a shallow depth of field, while keeping them in focus at the same time.

These are a few of the Gravity Defying shots from s photo shoot I had the pleasure to shoot… They blew my mind with how good they are. They didn’t fall once…